In astrology, nothing is more strange, stressful or confusing than a planetary retrograde. And if you happen to be one of the zodiac signs who will be affected by Mars retrograde the most, then strap yourself in, because it’s about to be a bumpy ride.

When a planet begins moving backwards in its orbit from our perspective here on Earth, taking us back in time. As we trip through the past, a retrograde encourages us to solve lingering problems and tie off loose ends. But when a retrograde takes place in a planet as fierce as Mars, it’s bound to be an intense experience. This is the planet of combat, war and aggression, as Mars governs the way you process anger and act on your impulses. Mars is also the planet of sex, primal instincts, ambition and passion, driving you straight toward whatever it is that you desire. Mars describes the part of you that is a pursuer and a hunter, because whatever Mars wants, Mars gets.

Mars retrograde takes place around every 26 months and it lasts around 72 days, making it both the rarest retrograde and—in my opinion—the most exhausting. Because Mars governs your strength and vitality, this retrograde has a way of making you feel like you’ve lost your mojo. However, the silver lining of this transit is that it gives us a chance to slow down, work through ego trips and learn from our failures. In a society that wants us to keep going and stay “on” 24/7, the exhaustion of Mars retrograde can often feel like tough break. As a result, Mars retrograde reminds us that we are worth so much more than our valor and productivity. 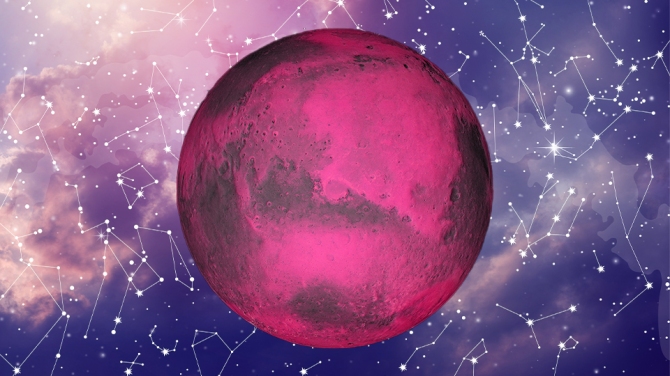 Mars will station retrograde on October 30 at 25 degrees Gemini. This transit will continue all the way until January 12, 2023, when Mars finally stations direct at 8 degrees Gemini. If you’re feeling spooked, that’s totally understandable, as it’s also the reason why Mars will remain in Gemini until March 25, 2023, when it enters Cancer.

As Mars retrograde moves through flighty, social and intellectual Gemini, this transit could lead to many heated debates and high intensity disagreements. Choose your words wisely, as insults are likely to sting and leave a mark. Because Gemini is a zodiac sign that feels easily bored, there’s a strong chance you may as though nothing is piquing your interest. You may even feel as though your attention is being diverted in several different directions, making it harder to focus.

The energy of this retrograde will ramp up during Sagittarius season and reach new levels of intensity around the full moon in Gemini on December 7, which will form a near exact conjunction with Mars retrograde. The energy of this retrograde can feel like a pressure cooker of energy, but this full moon may be what sets it off. It’s time to rethink your relationship with anger, because you can either learn how to control it or allow it to control you.

If your sun sign and/or rising sign happens to fall under any of the below zodiac signs, here’s why Mars retrograde will have a major impact on you from 2022 to 2023:

These 4 Zodiac Signs Will Feel Mars Retrograde The Most

For the next two and a half months, Mars—your ruling planet—will be retrograde. Because Mars governs your life force, you’re bound to feel anything that happens to Mars on a deep and soulful level. As Mars retrogrades, you may feel less inspired or stimulated by your day-to-day life. You may even struggle to feel curious about the world at times, as though nothing is satisfying your intellectual interests

Retrograding through your third house of communication, this retrograde could lead to a few heated arguments in which nothing gets solved. Remember to choose your words wisely, as angry exchanges could bring you more stress than is necessary. By the time Mars retrograde comes to an end, you’ll have a better understanding of how to communicate your emotions with others and heal your interactions.

No one’s feeling this retrograde more intensely than you, dear Gemini. Taking place in your first house of the self, Mars will retrograde through Gemini, forcing you to work through some serious ego trips and heal your relationship with your pride.

You may feel an intense need to assert yourself during this time, although finding the means to get your point across may be harder than usual. Although you may be working through some inner turmoil and deep-seated anger issues, this retrograde is a chance to let it all out! All those pent-up resentments you’ve been holding in have collected a lot of muck over the years, and if you’re feeling angry, remember—anger can be an incredibly motivating force! Allow Mars retrograde in Gemini to teach you how to process anger in a way that feels healthy and strengthening rather than detrimental to yourself.

When your ruling planet stations retrograde, it has a way of making you feel a little off-kilter. And because you’re ruled by passionate and driven Mars, this retrograde is bound to affect you on a bone-deep level. The experience may leave you craving intimacy just as intensely as you fear it, as it takes place in your eighth house of give and take.

When a planet moves through the eighth house, it stokes the fire of your desire to merge with something—or someone—else. And because this energy has a tendency to make us feel possessive, this retrograde may force you to rethink the way you’re respecting and asserting emotional boundaries. However, if you feel as though you’re not getting what you need, you may start wanting it all the more. This retrograde is showing you how to sink without swimming; to taste without over-consuming. While you may feel an intense desire for more, this retrograde is also showing you that you have a way of remaining resilient despite the shifting tides that surround you.

Struggling to see eye-to-eye with someone? Is your casual dislike for someone turning into a full-blown rivalry? As Mars retrogrades through Gemini, it will also bring up deep-seated conflicts in your seventh house of allies and enemies.

If you’re involved in a marriage or exclusive romantic partnership, this retrograde could force you to work through anger issues in a way that feels productive rather than destructive. As passions rise, finding a sense of control becomes harder and harder. Allow this retrograde to teach you how to count to ten and breathe before acting on your anger. When you allow your rage to guide your actions, you wind up showing everyone all of your cards. And when emotions are clouding your perspective, it becomes harder for you to trust your judgments. Allow this retrograde to redefine the way you solve relationship problems.

What Make-up Shades Are the Most (and Least) Flattering on You?