First post of 2023 and it’s straight in with my current makeup routine and some incredible new makeup discoveries. I don’t use the word incredible lightly, either: some of these products have completely changed my makeup routine and had my husband asking questions such as “what have you done to your eyebrows? I mean, why are they pointing upwards like that? Like bird’s feathers stuck on?”

“It’s the fashion,” I replied.

And it is. Or was, at least. Feathery eyebrows: I have grown to like them. Just in time for them to seemingly slide back out of fashion in favour of the nineties groomed-and-narrow brow. I like that the featheriness takes the weight out of the brow and lifts my eye area but equally I can see why that’s not for everyone. But that is the beauty of makeup – you can simply change your mind and do something different the next day. 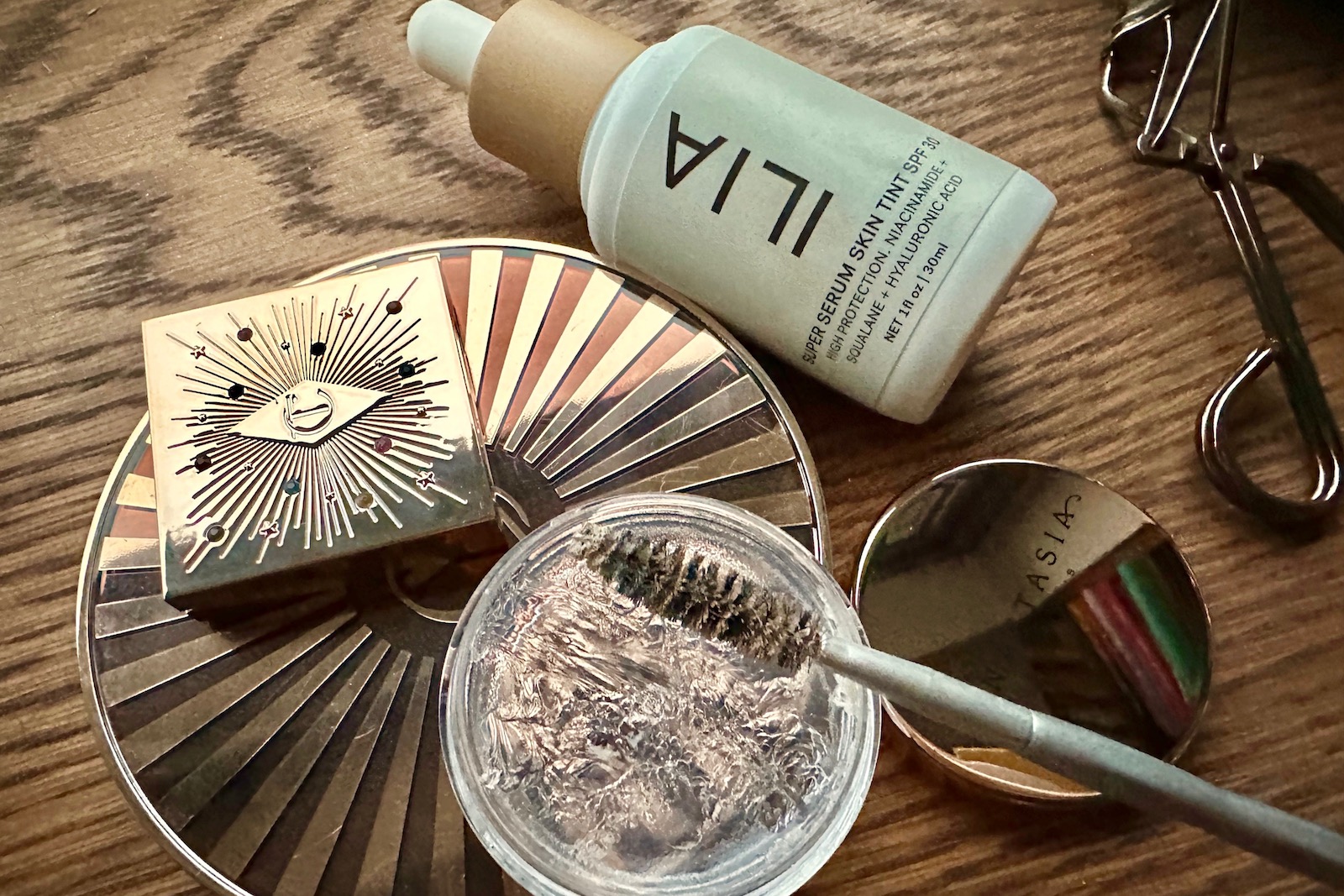 New discoveries then – and do watch the video at the bottom of the page to see these in action. Very briefly.

AD info for the following feature: no paid or sponsored content. Contains press samples sent with no obligation to review and affiliate links are marked *.

I don’t think I’ve ever had so many compliments on my skin since using this tinted moisturiser (for that is what it is). It has such a heft of illuminator in it that you cannot fail to glow. The coverage is light but capable, making skintone look more even and the finish is dewy and feels comfortable and flexible on the skin. 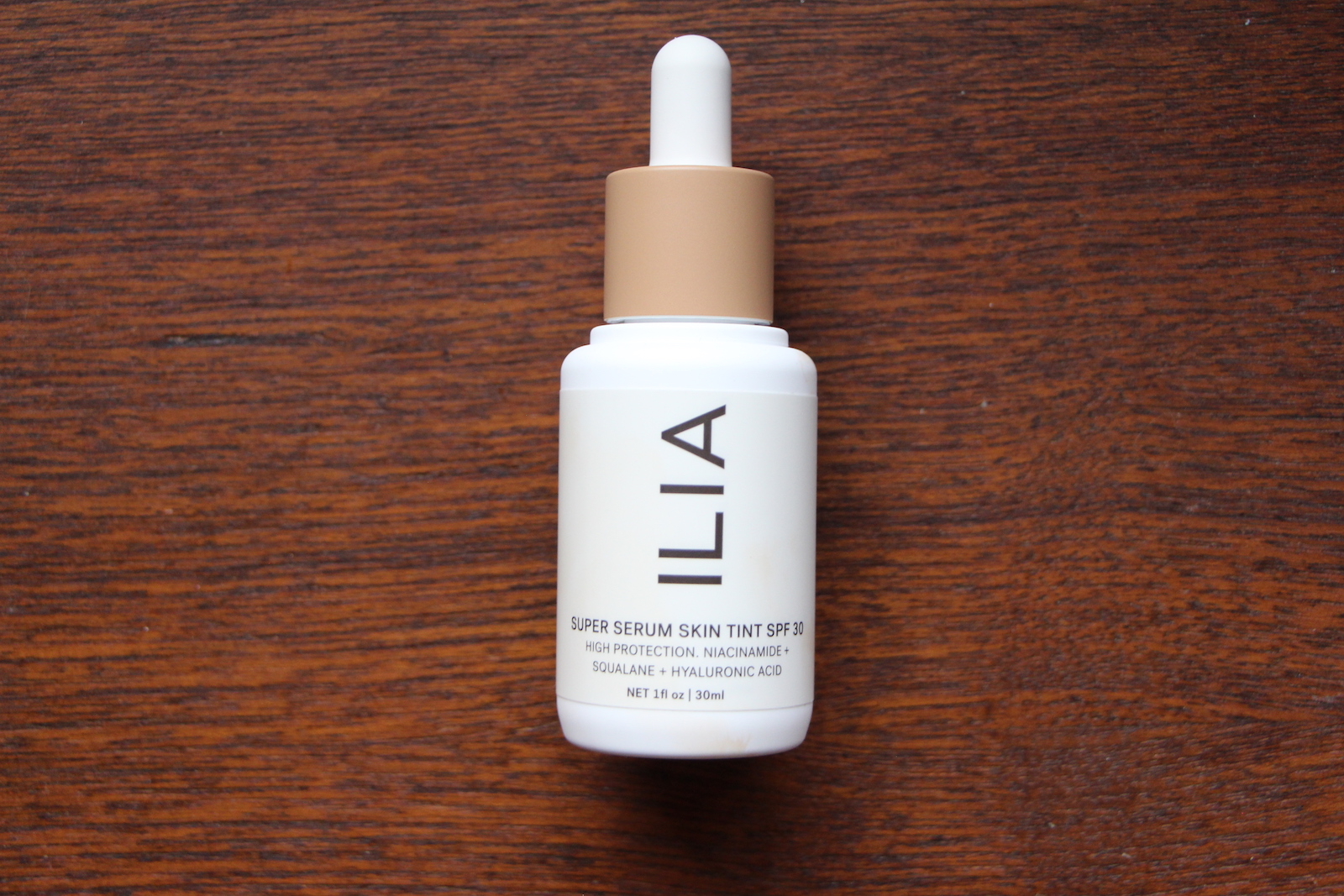 The ILIA skin tint is massively hydrating and I apply straight over serum (ironically, because this is also called a serum) for a one-stop daytime low-key look. A bit of cream bronzer and blush over the top and a lick of mascara and I’m good to go, if I’m after the bare minimum. The skin tint really does give a superstar sort of finish that looks perfect, but real, but glowier than real, but also undone, but still polished. I suppose what I’m saying is that it looks effortless but is actually working really hard on the light-reflecting front.

If you have lots of fine lines or quite crepey skin then be aware that illuminating products tend to also illuminate lines (usually not so much of a problem with dedicated highlighters as you would apply them both sparingly and in targeted areas) but I’ve found that a bit of pore-filling primer on the forehead and around the eye area does wonders. (Benefit Porefessional is always a good one.)

This Skin Tint sits at a premium price-point – it’s £46 at Sephora here* – but I’d say that you’re absolutely getting a premium product. This is the sort of face base you can rely on to always look good and make you look fresher and perkier. I’d say it’s slightly better for drier skin rather than oily as it doesn’t set completely and I do get a little movement in the t-zone if I don’t powder but you could always use a primer, as mentioned.

If I had to compare it to another product then I’d say that it’s quite similar to NARS Tinted Moisturiser with perhaps less coverage and more glow. I’m not mad-keen on the pipette dispenser but it’s so good that I forgive that.

Find ILIA Skin Tint here* – there are 30 blendable shades (this isn’t the sort of face product that requires an identical tone match) and I wear ST7. 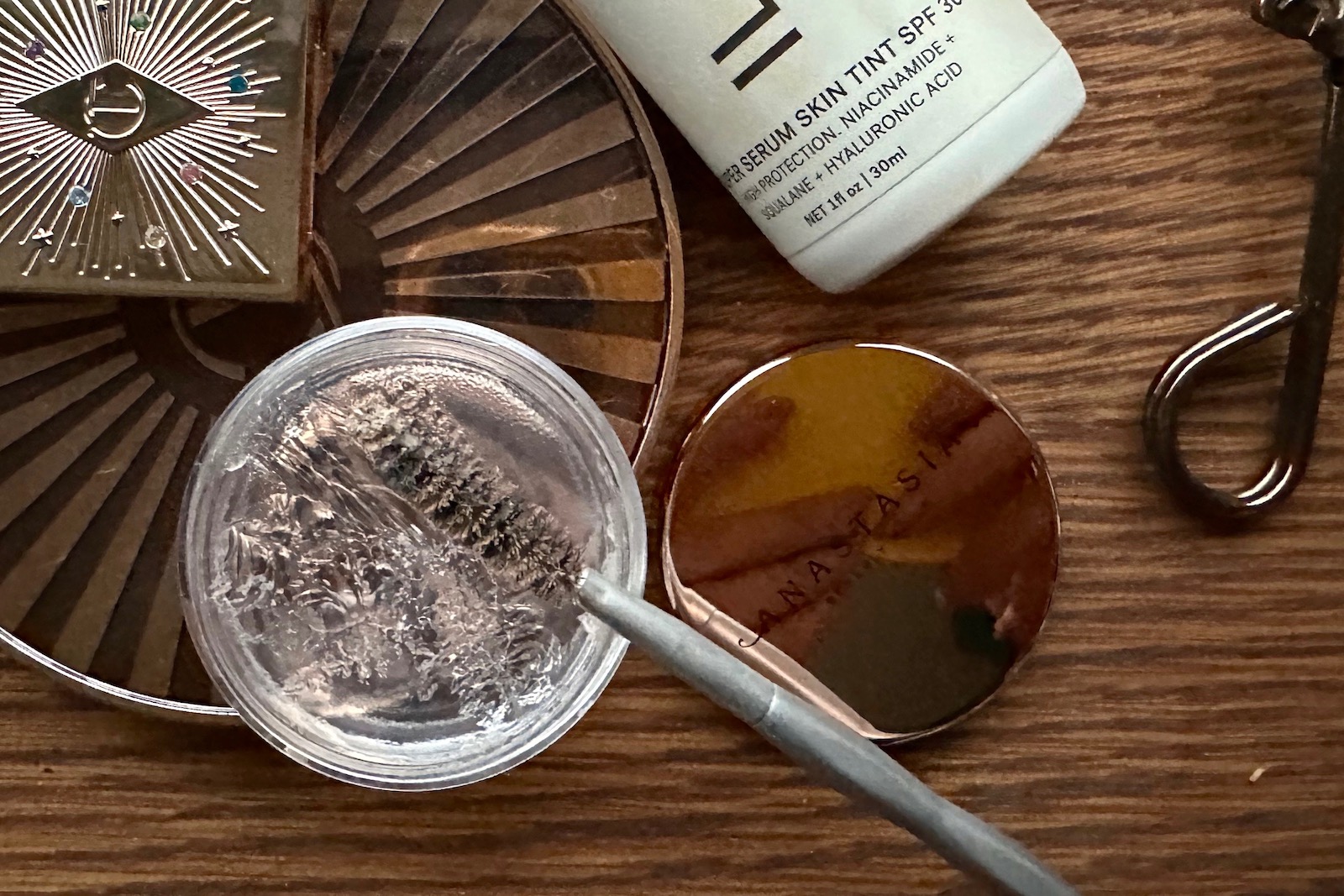 Let’s return to the feathery brows and this, the Anastasia Brow Freeze, is the ultimate product to make them with. It’s a wax but also a gel – sort of like one of those eighties hair gels that came in the big sticky pot – and it coats the brow hairs so that they are instantly shapeable and moveable. If Dali had seen this stuff he’d have been in his element – God only knows what his tache would have looked like. He’d probably have been able to shape whole words out of it. Sentences!

You’re supposed to use a special applicator but I don’t have that and I don’t feel I need it. The wax does clog up all of my brow brushes but a quick wash in boiling water melts it off and leaves them as-new. Ish. Maybe I should get the applicator! 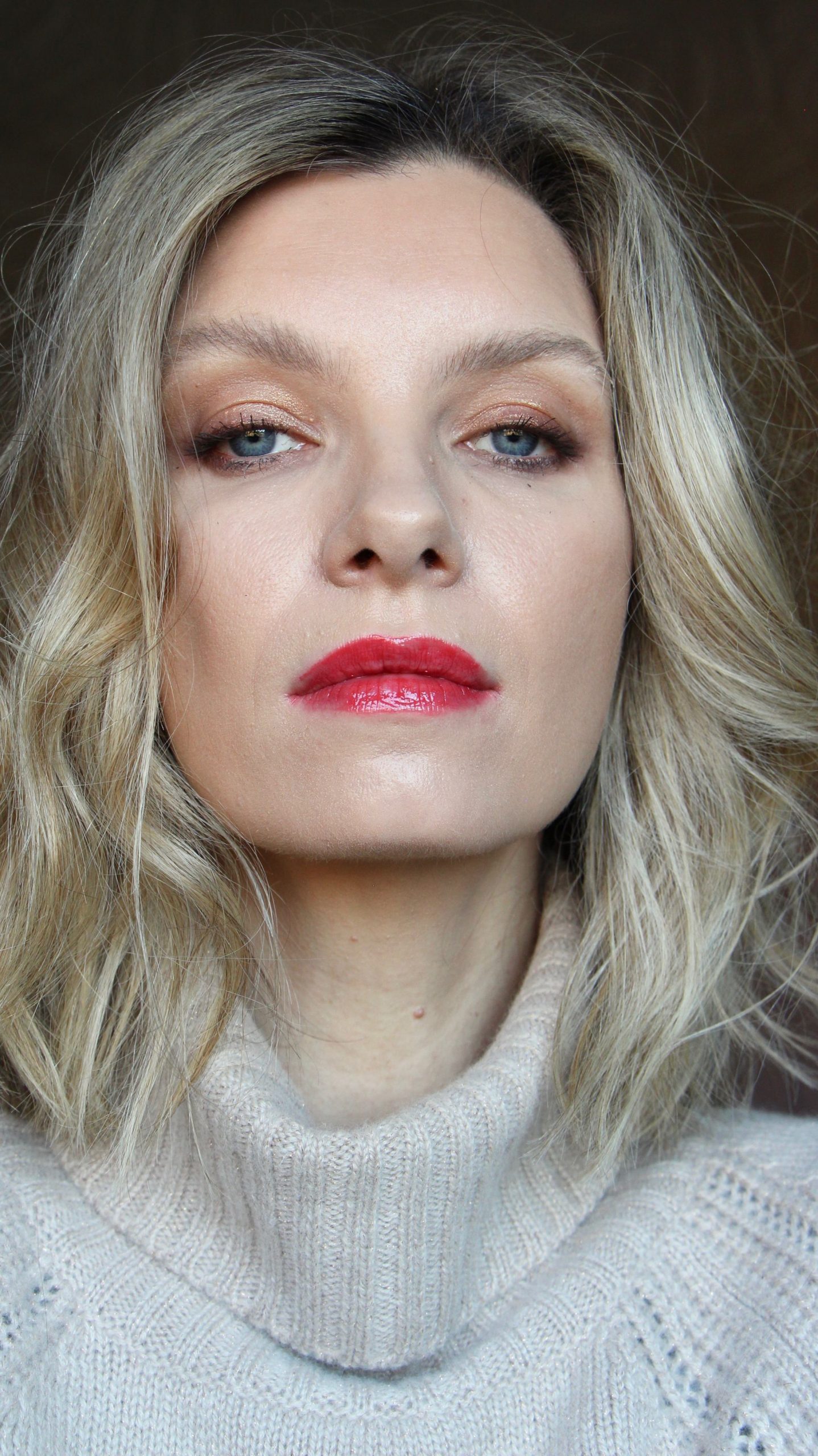 I haven’t found another brow product that can shape and hold like this one; it’s like using glue, but a friendly one that won’t make your brows clump together and then fall off. On my very fair brows it gives them massive definition without needing to add any colour and I love the way I can feather the hairs upwards so effectively – I’m a big promotor of using hairspray on brows for a quick fix and I stand behind that tip… but honestly, Brow Freeze takes things to a new dimension.

Every time I mention the Kajal eyeliners from Victoria Beckham I get asked if there are dupes. And understandably, because the price is pretty punchy for an eyeliner. (£26 at VBB here.) Yes there are other soft liners that hold fast (one of the best is the Avon one in my opinion, Gel Paint Eyeliner here*) but if you’re after the on-trend shades that VBB brings out then it’s more difficult to find them on the high street, especially with the right texture and staying power.

I’m using Copper in the video below and I think that it’s a really lovely alternative to plain brown if you want to add some sparkle and zing. I don’t think that it looks over the top as a daytime effect, either. The Kajal is really soft and so you get enough time to blend the lines out if you want a smokier effect, but it’s not out-of-control smudgey and it sets fast without budging until it’s time to remove it. The Olive shade is also marvellous and slightly more unusual, FYI.

New from the ever-expanding Tilbury makeup empire: Pop Shots. These are more about the glimmer than imparting lots of colour – think of the glittery “top coat” you get in her eye quads that you press onto the lids as a final light-reflecting hit. That’s what these are, but without the rest of the quad. I use Sunlit Diamond which is a very warm, coppery gold and slightly more modern than the classic yellow version. I thought that these would have limited appeal after the festive season was finished (and they are limited edition) but I’ve been enjoying adding something fun and frivolous to my makeup routine. You have to get your kicks where you can in January.

Final new find: Ruby Hammer’s Lip Serum Balms. They’re utterly beautiful. Buttery soft and spreadable and comfortable and you feel the effects even when the colour has disappeared. Possibly Red isn’t the wisest choice for a soft and buttery balm – it can be a disaster on the teeth! – but I couldn’t resist this one. It’s glossy and rich and such a true, true red – you wouldn’t want to wear it for kissing under the mistletoe as it would be everywhere but you’ve missed that boat anyway. And for all other situations, it’s just cheery and great. You can blot it down to a more muted lip stain if you like, but it’s just such a good shade I think it’s a shame to clip its wings.

Right, here’s the vid (if you can’t see it then you’ve managed to land on this page whilst it’s uploading!). I also used Charlotte Tilbury Cream Bronzer in Shade 1 (here*) and Beauty Pie brown mascara and red lipliner (here*).

How To Lose Weight After Being pregnant