If you do a Google search of the most romantic movies of all time, there are a few results most of us can agree swept us off our feet on first viewing: The Notebook, When Harry Met Sally and Beauty and the Beast. In truth? Noah from The Notebook was a bit of a stalker who threatened to hurt himself if Allie won’t go out with him.

When Harry Met Sally “invented high-maintenance women,” The Atlantic argues, and this reductive trope continues to this day. As for Beauty and the Beast, where do we begin? Gaston refuses to accept Belle’s many “no’s” and when it comes to the Beast, the lesson is that after keeping a woman prisoner in your castle, she’ll eventually fall in love with you. All major red flags, obviously. Meaghan Oppenheimer, showrunner of Hulu‘s Tell Me Lies, is acutely aware of the problematic narratives Hollywood has sold us over the years. “So many love stories have been told from a male point of view, and maybe some men think it’s romantic to completely force their will on these women,” she tells STYLECASTER. “I think pushing against that is really important.” As the showrunner of Tell Me Lies, Oppenheimer didn’t want the show to be “preachy” but at the same time, it was important to her to show the complexities of being a young adult. “It’s about showing the honest truth of it.”

Tell Me Lies is inspired by, but significantly diverges from, Carola Lovering’s novel
of the same name. “I changed a lot,” Oppenheimer says of the plot. It’s because the book “is very internal” and the story largely lives within the minds of characters Lucy and Stephen, who are portrayed by Grace van Patten and Jackson White. Oppenheimer says van Patten was perfect for the role of Lucy because she “has that vulnerability, but she also has a lot of strength. And it was really important to us that Lucy not just be entirely a victim.” Oppenheimer continues: “There is a sort of myth that if you end up in a relationship like this, it only happens to women who are weak or desperate or pathetic.” The show follows Lucy and Stephen’s tumultuous relationship over the course of eight years after meeting in college. “Although their relationship begins like any typical campus romance, they quickly fall into an addictive entanglement that will permanently alter not only their lives but the lives of everyone around them,” per the Hulu synopsis.

As young adults living on a college campus, the characters in Tell Me Lies navigate newfound independence, party culture and relationships in a way that we rarely see on-screen but almost all audiences will be able to identify with. “We meet Lucy at such a formative age that I think everyone can relate to. I definitely went through a phase in my life where I had a wall up and was afraid to be vulnerable because my emotions scared me, I knew I was sensitive and I tried to protect myself,” van Patten tells STYLECASTER. “I slowly discovered through experience and relationships that vulnerability and honesty with yourself are the most powerful, beautiful things. I really root for Lucy and hope that she gets to know herself by learning what she needs and being honest with herself and the people around her. ”

The show does a great job at making Stephen the asshole but also someone you can empathize with, particularly in the episode where we meet his family. How did you achieve that?

Oppenheimer: It was a very fine line with Stephen. It was probably the biggest challenge in the writer’s room, getting his character right. Because you want to care about him enough to keep watching, but you also don’t want to condone his behavior. What was really important to me was that, in order to understand Stephen, or care about him, I needed him to have an antagonist that is worse than him. And I knew I wanted him when he went home to not be the antagonist because he is the antagonist at school. Even though he’s also our leading man, he’s the antagonist. We did a lot of drafts of that episode.

van Patten: Jackson did such a beautiful job by humanizing Stephen in a way that makes the audience just as confused as Lucy may be. Being comfortable and safe with each other and the whole cast was super important to us. 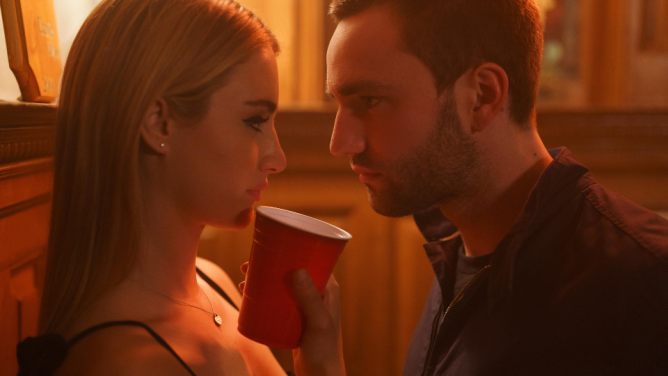 Grace, you said in a previous interview that “you can be the strongest person in the world and be fooled” and I think it comes back to our fundamental desire to be loved and wanted, but we often don’t know what that really looks like because of the movies we watch.

Yes, I do think that even the strongest can be fooled. Especially at that age when you don’t even know yourself yet. I think everyone wants to be loved and validated and listened to, and Lucy really latched on to Stephen because of that. She felt seen by him whether it was manipulation or not. Tell Me Lies is not a love story. These two people are not meant to be together and there are many signs that point to that, but this show takes these young people’s feelings so seriously and shows the journey that we have to go through to realize what we need in a relationship. I believe you can only learn those things by experiencing what is wrong, and even then, it’s still hard not to justify when you’re infatuated with someone. Love can make you feel absolutely crazy but it also forces you to learn a lot about yourself.

Grace, this show is set circa 2007 when things felt a little simpler pre the explosion of social media. What did you do to get into that mindset?

Oh gosh I can’t imagine if you sprinkled social media issues into the drama of this show. Plenty of issues without it! I loved being thrown into 2007. The music, the Blackberrys, the low-rise jeans, the Juicy Couture. What a time.

Do you feel there’s unfinished business with this story? What things would you like to explore in a potential season 2?

van Patten: Oh man there is a lot I would like to know. I just really hope Lucy discovers herself and what she needs and what truly makes her happy. I’m not quite sure how she gets there, but I’ll leave that up to the genius Meaghan Oppenheimer.

Oppenheimer: We wrote it hoping for season two for sure. We don’t finish their relationship at the end of season one. So, you know, knock on wood. Hopefully, we get to keep going with it.

Tell Me Lies is available to stream on Hulu.

On a regular basis, Basic + Refined – The Small Issues Weblog

US Embassy in Russia tells People to depart the nation